Stress can hit us at any time at work and leave our minds cluttered and frustrated. Here are a few short ways to relieve stress when it hits you at work: 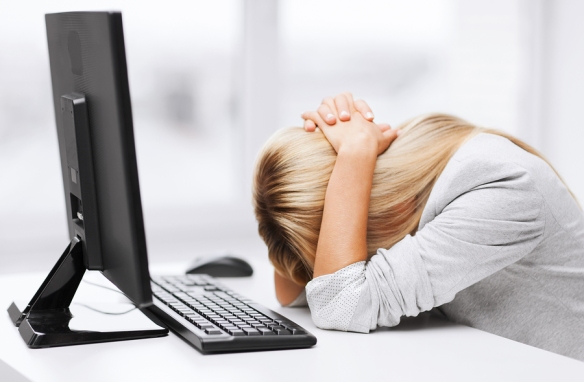 Focus on the motion of peeling the orange and how the rind feels between your fingertips. Try to peel the orange in an unbroken coil, it will refocus your mind on something simple and pleasurable and give you some time to relax.

Bring a banana to work with you every day, they contain high levels of potassium that regulate blood pressure to relieve stress and improve energy and recovery.

Music with a strong drum beat and dramatic sequence can be equally as relieving as classical music. Hum along to one of your favorite songs to put you in a happier mood.

Your ears contain many nerves, so learn the pressure points that help with stress and take some time to massage them.

Scrunch up balls of discarded paper and toss them in to your trash can. Set a goal of getting 5 paper balls in the trash. You will instantly feel good about yourself when you reach your goal.

Browse through some images to find a ridiculous one that will make you laugh.

Put your pen on paper and don’t lift it for 60 seconds. Your drawing doesn’t have to make sense or look like anything, the point is to relieve your overwhelmed mind with a mindless activity.

Stare at a point on the wall and allow yourself to blank out for a minute. A way of clearing a congested mind is to accept defeat and temporarily do absolutely nothing.

Wriggle your toes, fingers, nose, and legs to waken your body and promote circulation.

During interviews, we all try to tell the potential employer that we are a perfect fit for the position because we work hard and are team players. As great as this sounds, it doesn’t make you stand out from anyone else applying for that position. Here are 5 interview clichés to avoid:

You aren’t going to say that you don’t work well with others, so potential employers won’t be convinced by this phrase. Instead, let them know of teams you have built and worked with and explain how you contributed in that group. As well, this is a perfect opportunity to slip in a conflict that you were able to resolve within the team.

“I work too hard”

When you’re asked what your weakness is, don’t say that you work too hard. Also, don’t say that you’re a perfectionist either; this is one of the top answers so make up something else. Give the interviewer a real weakness of yours but make sure that it isn’t too incriminating of a weakness. For example, if you’re applying for an accounting position, don’t say you’re bad with numbers; say something like you aren’t very good at speaking up in meetings” and let them know what you are doing to overcome this weakness.

“I’m open to anything”

Don’t tell this to a potential employer. It sounds desperate and employers don’t like that. Instead of saying this, explain why you want this job as opposed to any other job. It shows you are passionate for their company rather than just getting a job.

“I’m perfect for this position”

This is exactly what you want the employer to know, but you can’t say it just like that. Instead, demonstrate how perfect you are for the company with your success stories and show them that you researched both the role and company in depth. Talk about the company and how important the things they do are to you, this is just a fancier way of saying “I will fit in” and will no doubt stand you apart from the rest.

Being able to remember a person’s name shows that the interaction you had with them was important to you. However, as there are people who have the skill of being able to remember names, others have a difficult time with it. Using strategies from this article to practice remembering names can help improve your name retention abilities:

Repeat names throughout the conversation

Repetition helps the brain form necessary connections for retaining information. Address a person’s name throughout the conversation, especially during greeting and parting.

Associate a person’s name with something memorable in your world. The more bizarre the association, the more likely it is that you will remember the connection. For example, if you were to meet a person named Jay who is a music producer, you could picture a blue jay at a mixing board so that you can remember both his name and occupation.

Make use of name tags, it is just as important to listen as it is to read. When you are able to read a name and have a face to assign the name to, it helps imprint the connection in your memory.

Ask for clarification with difficult names

It is perfectly fine to ask someone to repeat their name for you. When the name is repeated, say it again to yourself for verification.

If you forget a name, address it head on

Try to offer any information you know about a person if you have forgotten their name. This information could be something as simple as where you had originally met. If you have an idea of what a person’s name could be, go ahead and give it a shot and ask them if you have remembered correctly. If not, then apologize – it happens to everyone!